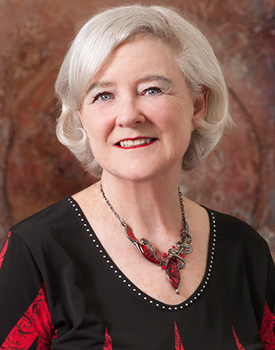 Born in Pennsylvania, Kathi Travers spent her youth moving frequently around the eastern half of the United States. Her father was working as a civil engineer for the U.S. government and then joined Martin-Marietta to work on the space program. During the early days of the space program, they moved to Cape Canaveral and rented a duplex near the beach. While driving to their new home, they heard news on the radio about the successful launch of Sputnick, and the race was on! Their duplex faced north, toward the Cape, and they began to recognize the sound of a launch. Their family joke was that you would run to the window to see the launch… or a garbage truck rolling by! She knew, even at 11 years old, that she was experiencing something unique.

Moving so often throughout her childhood taught Kathi several things: 1) Adaptability. No place is perfect, but no place is all bad. Change what you can and embrace the good — nothing is permanent. 2) The value of family. Family was the one constant throughout all her moves. 3) To have a positive outlook. Each move was an adventure, and she was going to experience something new. 4) To be friendly and open to meeting new people.

Kathi graduated from Florida Institute of Technology with a B.S. in Physics. She worked for IBM for 30 years, starting as a programmer and then moving into Market Support, where she held several different positions.

Kathi’s frequent moves continued into adulthood, while she and her husband worked for IBM. One of those moves brought her to Dallas in 1988. After several moves around the Metroplex, Kathi built a house in Corinth in 2003 and has now lived in that home longer than she has lived anywhere else in her life.

Shortly before Kathi retired, her daughter-in-law got her real estate license, so in 2004, Kathi got her license as well so they could work together. Not long after that, Kathi also got her insurance license. She has focused mostly on real estate ever since.

Kathi loves working with people… finding the right property for them and seeing that everything possible is done to make the experience as smooth as possible. Her background of frequent moves –- experiencing different types of homes and the unique characteristics of each house and location — gives her an insight into what to look for in a home. She tries to make sure her clients undersand the process and what to expect, so there are no unpleasant surprises. She also makes sure all the details are attended to throughout the process. All of these characteristics work together to create very satisfied clients.

Kathi has two children and four grandchildren and is very active in her church. She has always loved crafts and handwork. These days she directs that into knitting hats and making sleeping mats out of recycled plastic bags for the homeless. She is known for her “bling” and for being happy.

*We follow the requirements of the Americans With Disabilities Act (ADA), the Fair Housing Act, and related laws regarding reasonable accommodations. Please let us know if you have such a request.